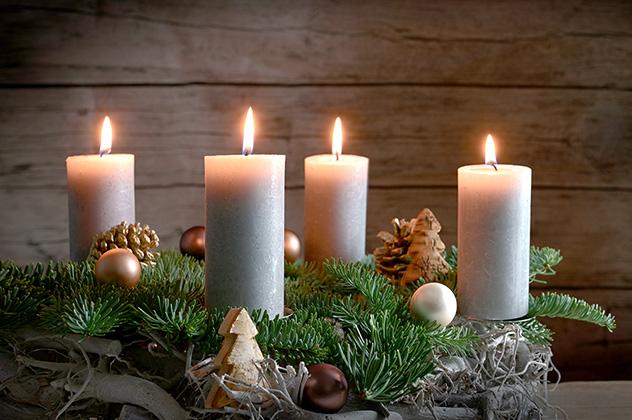 The Time of Our Lives

We’re coming into that beautiful stretch of the school year, arguably my favorite, in which our students are enjoying the change of season and the coming of a long Christmas holiday. The prospect of Christmas makes the next several weeks of school almost magical. Volunteers have decked our halls and Christmas music for Lessons & Carols drifts from our chapel, band and orchestra rooms.

I teach my chapel students that it’s the calendar that regulates many of our deepest emotions. It teaches us what to be excited about. An approaching birthday, a family vacation, even the first day of school create expectations in our hearts which display in giddiness, excitement, or nervousness. We feel it in the smallest of increments, too. Students admit to me that they look forward to Fridays at school more than Mondays or Tuesdays. Sure. How could it be otherwise?

In the bigger span of time, students also admit that they look forward to Christmas more than they look forward to Easter, which, if you think about it, is a little skewed. While the birth of our Savior is a joyful event, surely his conquest of death by his mighty resurrection should get equal time and attention. (Actually, the calendar does this by giving Christmas twelve days, while Easter gets forty!)

Most Christians, regardless of their particular tradition, celebrate Christmas and Easter. Many are unaware, however, that these two great holidays are cherry-picked from a larger tradition that marks time over the span of Jesus’ whole life, not just his birth and resurrection. There is an entire calendar which marks the major events of his life, through which God’s purpose in history is expounded in every annual cycle of time. This is, in fact, what history is—a record of what God does in time—and the most consequential action of history is the life of our Lord.

Before the coming of Jesus, the people of God also had a calendar. It began with Passover, a seven-day feast which marked the Exodus out of Egypt. Seven weeks later was Pentecost, which commemorated the formation of the tribes into an identifiable people under law. Finally, counting off seven months, the Feast of Booths or Tabernacles celebrated the expansion of that people to include the whole world. There’s much more to it, and it’s complicated to be sure, but we should acknowledge one notable feature. The entire Old Testament calendar is regulated by the moon; it is a lunar calendar, which is to say, liturgically speaking, that the Old Testament takes place at night.

Anticipating the Messiah, however, the prophet would say, “The people who walked in darkness have seen a great light.” Near the end of our Old Testament Scriptures, Malachi declared that the “sun of righteousness would rise, with healing in his wings.” The spectacular advent of Jesus led the Church to rebuild the calendar, with an orientation not around the moon, but around the sun—the Son. History is now the story of eternal day, or, to reduce all of history to one statement, there was evening and there was morning.

So how does this work for us? Yesterday was the first Sunday in Advent (from the Latin, to the coming!). There are always four Sundays in this run-up to Christmas. During this month, we are invited to place ourselves in that space which was occupied by our forebears before Christ was born. It’s hard for us to do this and requires some spiritual imagination. What was life like before Christ? What was it like to be a faithful Jew waiting for the long-expected Messiah? Since we know the whole story and how it ends, we can situate ourselves in that space only to a limited extent.

The message of Advent, however, is bigger. While we live “downstream” from the life of Jesus, we still occupy an historical space in which we, too, experience unfulfilled expectation. Now we await his second coming, his return in glory at which all of God’s purposes in history will be brought to consummation. If that reality seems like a fairy tale, or something you cannot really imagine or comprehend, then you really can identify with those who lived before the advent of Jesus. After all, the circumstances of his first coming were equally unimaginable to them.

For all of us in the school community, faculty, parents, and students alike, the calendar directs our attention to the ongoing formation of virtue, of preparedness, wakefulness, and expectation. As it happens, the Church calendar neatly overlaps most of the academic year. At New Covenant we take advantage of that and attend devotionally to its feasts and festivals with your children. In doing so we show them how to enjoy the time of our lives.