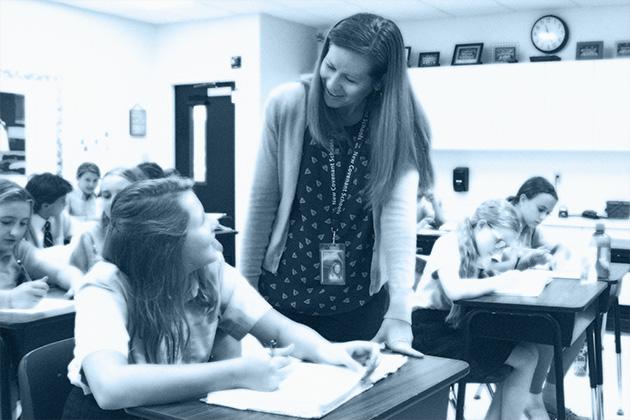 What’s Most Important in the Classroom? The Teacher

Years ago in the early 2000s, an educational consultant I respected confidently asserted that I had better pay attention to remote learning. He suggested that the school would increasingly face difficulty attracting day students because families would eventually opt for online learning for a fraction of the cost. Technology, he said, was going to make “brick and mortar” schools nearly obsolete. He was charging me handsomely, so I always took his advice seriously; however, I remained skeptical. In my gut I knew that there was so much more to school than mere information transfer; that his scenario was unlikely to come to pass.

A few years later Lynchburg City Schools boldly announced that every student at Perrymont Elementary School would be the recipient of a new Chromebook. I got the news from a full-page ad in the newspaper where it was celebrated as an unquestioned, obvious good. A new path to self-directed learning was on the way! I was working on an advanced degree at the time, and that was the moment my thesis was born. I researched many of the available studies and wrote about the use of technology in the classroom. I found that technology has failed to deliver higher test scores, and that much of the data show that over-reliance upon technology degrades learning. You can read the whole thing at the link at the end of this article.

Little did we know that the pandemic would provide us with the perfect laboratory to test my findings and the claims of my consultant, as well as the policies of school districts here and across the country. With the explosion of student software since the 2010s, surely it would be relatively easy to pivot to online learning and students would not miss a beat. That is not what happened. Across the board the results were disastrous, and even private schools such as New Covenant were negatively affected.

To be fair the challenges were steep. First, school districts were bound to provide equal access to all virtual learners, which proved to be difficult. In many cases this led to enforced deprivation of content to students who did have access to the internet, meaning that if one group didn’t have access, then no group would be given access, lest they be advantaged unfairly. Second, the roll-out was abrupt and unplanned, with little time to overcome huge challenges or field test systems, even with massive amounts of government spending thrown at the problem. Schools simply didn’t have time to send millions of children home with an effective plan for the extent of time they would be kept out of the classroom. These and many other factors contributed to failure, but setting aside all of those challenges, one thing still became clear: the overwhelming majority of K-12 students are not well-served by online learning, even with support at home. Not surprisingly, the younger the child, the worse the outcome. There may be benefits to be had from using technology to deliver learning, but it is clear that media do not cause learning. Grocery trucks have little impact on our nutrition. They merely deliver food. That is how technology works.

We should be careful not to infer too much from such a catastrophe with so many variables. It is fair, however, to probe more deeply and continue to call into question the centrality of technology in classrooms and how it is deployed. What students were subjected to at home is not very different from what many are subjected to in public school classrooms and many private school classrooms every day. Computers are increasingly marginalizing students away from live instructors. With Chromebooks in hand, the students take their seats, boot up and turn in their work online after reading the day’s lesson from the screen. In far too many cases, teachers sit at their desks as a supervisor or facilitator with few demands for actual instruction. Deep reading is not encouraged, and handwriting is now a lost art. Not surprisingly, this has driven many teachers not only out of city schools, but out of the profession altogether. The trend is so strong that the Virginia Department of Education is now considering “teaching” certificates for non-degreed, non-certified instructors, since teaching is no longer the central task.

That brings us to the main point: the teacher is the most important thing. There is no textbook, software program or internet resource that can replace a gifted, loving teacher. We are social creatures, designed to live and learn in community. Learning to read, write, add and subtract, while important, are only part of the larger work of communicating faith, values, culture, history and habits to the young, all of which are communicated in a context of life-to-life investment. Computer technology has achieved near-miraculous access to information, connected social groups that would otherwise remain ignorant of one another, and opened up avenues of exploration not previously accessible. However beneficial these outcomes may be, they should be subordinated to the single, strongest driver of student success, the teacher.

See Education in Context of Student-Accessed, Digital and Applied Technology.