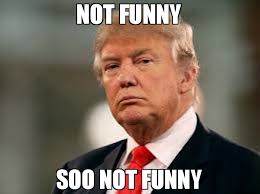 Rereading Reinhold Niebuhr’s essay Humor and Faith reminds me that humor is the exclusive domain of human beings.  While my dog demonstrates noticeable “joy” when I take her to my office off leash, and while she is often amusing to me, I never mistake her behaviors for human humor.

Humor is one way humans process reality, particularly incongruities in reality.[i] That’s what humor is.  We laugh, chuckle, or outright guffaw when we detect things that don’t square in our experience.   A boy slips on the ice, which is not especially funny, but a proud, pretentious man or woman goes down, and it’s funny because the slip inflicts an indignity that is incongruous with the posture of the person.  Now, it might be rude to laugh, but when we spot poetic justice in the wounding of a man’s pride before a real fall, we can’t help but smile.

Abraham and Sarah host strange visitors and provide dinner over which one of the guests announces that Sarah will have a baby.  That’s funny because she is 90 years old.  Naturally, she laughs.   It’s real laughter, too. The incongruity not only lies in the fact of her old age, but also in the way the visitor said it as though he really believed it. When she gave birth a year or so later, she named the boy Isaac (pronounced YIT zak), which is Hebrew for “laughter,” and almost sounds like a giggle when uttered properly.

In this way humor resolves and affirms our recognition of higher norms.  In order for humor to work, there have to be norms we all get, standards we all affirm, otherwise incongruity is not possible.  British humor is often lost on Americans for this reason.  Incongruity assumes a reservoir of shared viewpoints, sensibilities, culture, religion and manners, and when those norms are not shared or when they are lost, incongruity is lost, and when incongruity is lost, well, it ain’t funny.

I don’t see much laughing in our culture anymore and this is why.  The agreed upon norms are wrecked; we share few values, and we possess a shrinking common vocabulary.  We no longer talk meaningfully together.  God knows we can’t laugh together.  I discovered this pointedly when I ran across an interview with John Waters[ii] (Pink Flamingos, Hairspray, etc.), which explored, among other things, why Trump ruined Camp. Waters is the king of bad taste and raunchy movies.  His movies are provocative and are supposed to be darkly funny.

Waters built a career celebrating his own immorality – what he calls camp.  Stay with me because Camp is hard to explain. It’s pretty far away from the world of most soccer moms.  Let’s begin by saying it’s not that place you send your kids in the summer.  Camp describes an esoteric posture, a moral sensibility, a way of being, and a way of viewing the world.  It’s the moral equivalent of Alice’s looking glass, but a completely fractured one. As Susan Sontag notes, “the essence of Camp is its love of the unnatural…[it] rests on innocence. That means that Camp discloses innocence, but also, when it can, corrupts it.”[iii]   In Water’s world – he was openly homosexual when it was as yet unapproved – camp “started as a secret gay word that only gay people understood.”

The purpose of Campy films was to entertain elite audiences by trashing the moral sensibilities of just about everybody, and particularly Christian morals which, in the 60’s and 70’s were still latent and somewhat persistent in the culture. Waters films were “funny,” sorta, for about three decades so long as these norms remained intact.  That’s the way humor works. Humor requires a norm as a backdrop upon which an incongruous image can be focused. Waters’ humor was so revolutionary, gross and offensive so that even Roger Ebert had to admit that “it’s not film; it’s an object.” But revolutionary humor is still humor.  In Waters’ case, however, it was only funny as long as the culture hung on to the norm.

But what happens when the norm collapses?  Where do you go for humor if you’ve destroyed the thing you need for poking fun?  Waters admits, “I’m trying to go beyond any of those terms — camp, trash, or filth — into another level of humor. But camp was always something that was so bad it was good, and didn’t know it.”  In other words you’ve gotta stretch the limits further, you have to find new norms to exploit. This probably can’t be done, and the result is a pretty dull world.  As Waters surveys the political landscape of current Republicans and Democrats, and the human caricature which is Trump, he concludes, “It’s not a funny time.”

So there’s nothing left to laugh at.  Christians aren’t worth laughing at anymore.  That’s so yesterday. Even politicians aren’t funny any more.  It’s sad, too, as Niebuhr observed, “A sense of humor is indispensable to men of affairs who have the duty of organizing their fellowmen in common endeavors.  It reduces the frictions of life and makes the foibles of men tolerable…we prove by laughter that we don’t take…annoyance too seriously.”  Winston Churchill and Ronald Reagan were famous for that.  The snowflake generation will never attain it.

We’ve moved on. We have lived on perverted humor so long that we can no longer see the greatest of incongruities, the kind that cannot be resolved with humor. We only laugh at the incongruities of life when they don’t affect us or when they do not present as harmful.  The human dilemma, however, is that there are great incongruities in our existence which are of major importance and do affect us. We are confronted with evil, which cannot be laughed away.  We are confronted with death, the greatest of all incongruities in our experience – no laughing matter.

So here is where Niebuhr is most helpful.  He says that “humor is a prelude to faith, and laughter is the beginning of prayer. Laughter must be heard in the outer courts of religion, and the echoes of it should resound in the sanctuary, but there is no laughter in the holy of holies.  There laughter is swallowed up in prayer, and humor is fulfilled by faith.”  If humor addresses the minor incongruities of life, faith confronts the big ones.  It is the only possible response to those that threaten the very meaning of our lives.

The greatest incongruity of history, of course is the life of Jesus:  Incarnate by the Holy Spirit of the Virgin Mary – that makes people laugh; was crucified, died for the sins of the world, and was buried.  Imagine that.  The Lord of Glory died.  It was a bad Friday, but the Church saw the incongruity and called it Good Friday.   Then he was raised from the dead, an action that is totally incongruous with our experience.  Now we can’t laugh hard enough or long enough. That’s a state we call perpetual joy.

The laughter of a faithless culture is bitter, derisive.   It no longer springs from a merry heart but from dry bones.  A culture of faith is a culture that can truly laugh.  Once faith is lost, it ain’t funny.

[i] See Humor and Faith in The Essential Reinhold Niebuhr: Selected Essays and Addresses, pp. 49-60