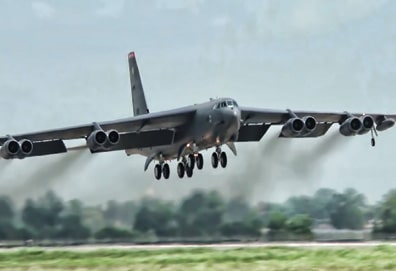 Fear is Not the Companion of Caution

The military flyover at a football game makes us stand tall, and leaves us awestruck as kickoff approaches.

Not so when I was a kid. Growing up in the early sixties, I was younger than ten when the Vietnam War began. I lived a few miles from Michael McCoy Air Force Base, now re-named Orlando International Airport – the last stop before Disney World! It’s a happier place now, but back then it was the home of a bomber squadron of B-52’s, the largest bombers in the Air Force.  MAFB had runways 12,000 feet long – some of the longest in the country – because a fully loaded B-52 required every bit of that for take off and landing.

As the war progressed there was more activity at the base and the bombers would often scramble in the middle of the night. We didn’t have air conditioning, so we left the windows open, and I could hear the whine of the engines, revving up for take off.

Then they would come – one after the other, every few minutes, screaming over the house which was in the jet path, rattling the windows with a deafening roar that nearly shook me out of my bed.

I was terrified. I would bury my head under my pillow and pray that it would stop. In my mind the bombers were loaded and headed to Hanoi, which, in my limited understanding was only a short flight away. We were at war, and I was afraid – very afraid.

Not much has changed in 2,000 years. The Gospels of St. Mark and Luke rehearse the story of Jesus and his disciples, who embarked over the sea of Galilee after a long day of work. Jesus was exhausted and fell asleep on a pillow in the stern. The disciples sailed along until a vicious pop-up storm rose, sending huge waves crashing into the boat. They were experienced sailors, but even they panicked as they took on water and started to sink. They scrambled to the back  where Jesus was lying, and screamed at him with accusation, “Don’t you care that we are about to die? How can you sleep?” Jesus stood up and “rebuked the winds and the sea,” and immediately they were still. Then he said to them, “Why are you afraid, you of little faith?”

I note from this story that Jesus was not chiding them for taking precaution or for seeking to save themselves. He gently pointed out that fear need not be the automatic companion of caution. I am sure that some of our students have anxiety about covid-19, as it seemingly stalks us relentlessly. The media is largely sensational, and there is a good bit of panic in the population. Leaders give us conflicting information, and the best medical minds we trust offer sobering possibilities, which we should not dismiss. We take precautions, we listen to experts and to government officials, and we do what we are advised to do.

Fear, however, follows easily. The message of Christ is remarkable in that he asks us to answer the question, “Why are we afraid?” We would rather hear him say, “Peace, be still,” and we wish that the germs would likewise obey, like the wind and the sea.

So we must learn to trust. Our circumstances require us to exercise faith so that we would ultimately dread nothing above the loss of Christ. This is hard. Parents do not always feel confident that they are good at comforting their children.

My own mother, born in 1934, was five years old when Hitler invaded Poland to begin World War II. My grandfather had a radio, and played it loudly during dinner time, anxious to hear Edward R. Murrow’s live reports on CBS. She, too, was terrified. Years later when I was a young adult we compared memories about my bombers and her radio, and realized that we had experienced common fears. It was a profound moment when I realized that my mother’s comfort to me was born out of her own childhood. It was also born out of her faith, a faith she had come to possess as a young 28-year old mother, just before she brought me into the world.

I hope that you, too, will seek the way of faith. I am not advocating an easy recipe by which you escape or deny the real anxiety of the moment. Jesus didn’t deny the ferocity of the storm to his disciples, or pretend that they were not in danger. Rather, he invited them to enter a new reality, a new understanding, that dangerous storms such as they experienced were not random events, but completely under his control. As such, they were not occasions for fear, but for faith.