From Consumer to Community

Any civilization that forgets the wisdom of history and fails to honor it will suffer two evils:  apathy toward the future and, eventually, revolution.  Revolution is a complete break with the past.  Apathy doesn’t care.   It is the empty nothingness that fills the hollowed out void of the soul of a culture.  It welcomes the rock-throwing, car-burning, foul-mouthed storm troopers of the coming revolution – with a shrug.

I grew up at the tail end of the Baby-boomer generation, through the horribl 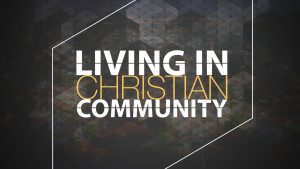 e 60’s, the Cold War and Vietnam.  During the 80’s I came of age reading Francis Shaeffer and other cultural observers who shot warning flares high into the twilight sky as our society in the words of Robert Bork, was increasingly “slouching toward Gomorrah.” Their signals and predictions were disturbingly accurate, and much of what they predicted has now happened.   I have come to the sober realization that a structural shift has occurred in the culture of the West, including America, and that in the short run, it is not reversible.

I spent several hours with our faculty during In-service this year talking about such matters because they are powerfully relevant to the formation of our students.  Contemporary American life as we experience it has a profound effect upon the desires and affections of your children.  Because we are an educational community, our purpose is to shape those affections toward that which is good, true and beautiful.  That is not an easy task, given the powerful currents of what Rod Dreher calls “liquid modernity.”

In his recent book, The Benedict Option, Dreher makes the notable observation that Classical, Christian schools such as New Covenant may provide the widest forum for teaching, for spiritual formation, for building community, for combating the rot of Moralistic-Therapeutic-Deism – MTD – which is the research label we now apply to the worldview of Gen-Xer’s and Millennials.  He offers several paths that might be pursued for strengthening our institutions, each of which is descended from the ancient rule of St. Benedict: order, prayer, work, stability, and community.  In this and future editions of Quid Novi, I’ll discuss these in more detail, but for now, consider the last one:  community.

What is a Community?

A community is not a network.  It’s not an association of people who share a common activity or interest.  One hundred people who shop at Walmart at 2 pm on Saturday are doing the same thing, but they are not a community.  One thousand people who gather intelligence data for the CIA may be called the “intelligence community,” but that’s a misuse of the word as well.

A community is a group of people who share a life.   As Paul said to the believers at Thessaloniki, “we were ready to share with you…own lives.”  Communities are made by people who live in proximity to one another and who are characterized by shared beliefs and an alignment of purpose.  They hold their humanity in “common,” with a kind of oneness that entails sharing joys and griefs, festivals and funerals, work and worship.  A community requires a corporate identity in such a way that necessarily limits individual freedom and puts the good of others first.

As an educational community New Covenant fulfills much of this role and can offer powerful support to your family.  Our community is not a mere association of individuals buying the services of skilled professional educators.  We share in the experience of raising your children by setting before them examples of faith and virtue, through teachers who have life-to-life relationships with your children, influencing them in how and what to love.  Our faculty and staff members demonstrate what is good, what is true and what is beautiful, not because they are paid to do so, but because they believe in, and are blessed by being in the community also.

I encourage you to think of our school in this way – a community that has a shared life.