“Abraham looked for a city which had foundations, whose builder and maker was God.” – Hebrews 11:10

Born in 2000 BC, the Scriptures teach us that Abraham became the father of our faith. He left his home in Chaldea and wandered west, heeding the call of God, who had promised to make of him a great nation. He simply believed God when none of God’s promises were visible to him. Through the eyes of faith he looked past the transiency of the world, and saw the permanent things, a city which had foundations, whose builder and maker was God.

As children of faith we, too, seek the permanence of God’s kingdom, and labor to make it visible in our lives and in our work. New Covenant Schools is part of that vision, and we are seeking to advance and strengthen it. In the October 4 edition of Quid Novi, we announced the beginning of the “Permanent Things” capital campaign, and I am pleased to explain it to you.

Over the last 25 years we have carefully balanced the cost of operating the school – salaries, curriculum, utilities – with the cost of building a campus that would support our program. We have tried to structure tuition to cover the former; for the latter we have relied upon the gifts of hundreds of parents, grandparents, friends and benefactors, to build classrooms, labs, offices, ballfields and gyms. There has always been a trade-off between keeping our debt low and manageable, while striving to develop a facility that fully accommodates our children.

For example, nearly twenty years ago we built the small chapel. It was lovely, but at the time it was constructed it was already too small, seating only 75 students at a time. It was all we could afford, and the trade-off was to keep the school financially stable even through campus development. This reality has repeated itself through three major campaigns and a few smaller projects that have built out our campus to what you now experience.

The Permanent Things Campaign is a ten-year plan designed to accomplish three things. First, it will expand our chapel to 175 seats that will accommodate each division of the school and larger parent events. It will add two new classrooms and a recreational area by the Greek Steps that will accommodate our student body as it continues to grow. Finally, it will retire all of the remaining debt on the campus and will provide strategic cash reserves to strengthen our fiscal stability. This campaign goal is to raise $2,000,000.

That’s a big number, so let me break it down for you in stages.

Stage One: The Marie Macdonald Chapel. The Permanent Things campaign has grown out of our commitment to Christian faith. Faith is the foundation of our school and all that we do flows from it. One of our highest values is to express our Christian vision visibly. The chapel was originally constructed as a dedicated sacred space that communicates to our students our commitment to Christ. It makes a statement about the permanent things that endure (faith, hope, and love), and the reality of the life of the world to come.

The chapel expansion was designed before the pandemic, but the project was put on hold for over a year as the country suffered shutdowns and supply chain problems. In June 2021, however, construction began and will be completed before the Christmas holiday. I am pleased to note that the cost of this stage of our plan has been fully funded, even with rising costs. A total of $582,200 has been raised, enough to finish the project without incurring any indebtedness. The funds are not only sufficient for the expanded structure, but generous friends of the school, and the school’s affiliate parish, All Saints Church, have provided a new organ, four new stained glass windows, and a new altar, which was designed and built by New Covenant parent, Toby Davies (Ainsley-1st). The general contractor is also a parent in our community, Rodney Foster (Bailey-Class of ‘20; Dalton-12th; Emme Sue-7th) who also built the Workman-Hall Fitness Center two years ago. We could not be more pleased with this beautiful expansion.

Stage Two: The High School Commons. As our School of Rhetoric continues to add students, our current programming requires that we build two more classrooms. These rooms were planned in 2013 when the Workman Field House was completed, and will be located on the south side of the fieldhouse at the lacrosse wall, currently used as recreational space for recess and other physical activities. Once constructed, the classrooms will mirror the Fitness Center on the opposite side of the building. The large space below the service drive will be developed for a variety of uses associated with the Fitness Center, including a bounce wall and hard surfaces for use in inclement weather. The cost of this stage is projected at $500,000, pledges to which now stand at $561,600.  Construction on this stage of the project will be complete by October 1, 2022.

Stage Three: Debt Reduction and Strategic Reserves. The Permanent Things campaign also looks beyond present needs, and intends to strengthen the school’s financial position for years to come. The board’s vision is that the school will be here to serve future generations – the children and grandchildren of our current students. To that end we have developed a ten-year strategic goal of a debt-free campus and strategic financial reserves that will protect the school from unforeseen economic downturns or other events. We are determined that in just ten short years (before this year’s kindergarten students graduate!) we will have set the school on a path to permanence. This commitment entails $500,000 to retire the debt and $500,000 to increase our reserves beyond their current levels.

Reaching Our Goal. You can see from the diagram below, that we have scaled our appeals for funds into a pyramid of giving. We have already been blessed with generous gifts which have enabled us to begin building. While we continue to solicit leadership gifts, we are also appealing for funds in different amounts such that everyone can participate at a level appropriate to their ability. Take a moment to examine the chart. We have itemized exactly how many gifts are required to reach the goal. Everyone who shares our vision of classical education, and affection for the school, can find a place on the giving chart. Gifts can be structured over a period of three years, making participation even easier.

This goal is a bold vision, but it need not be seen as overwhelming. The first stage of this plan has already been paid for, and over 25% of the second stage has been obtained. The Permanent Things Campaign seeks to provide the needed additions to our campus, while planning for the future with prudence. Parents of our students should know that our children’s educational path is protected for years to come.

I invite you to consider how you can help us achieve the permanent things that we pursue in our vision of classical, Christian education. 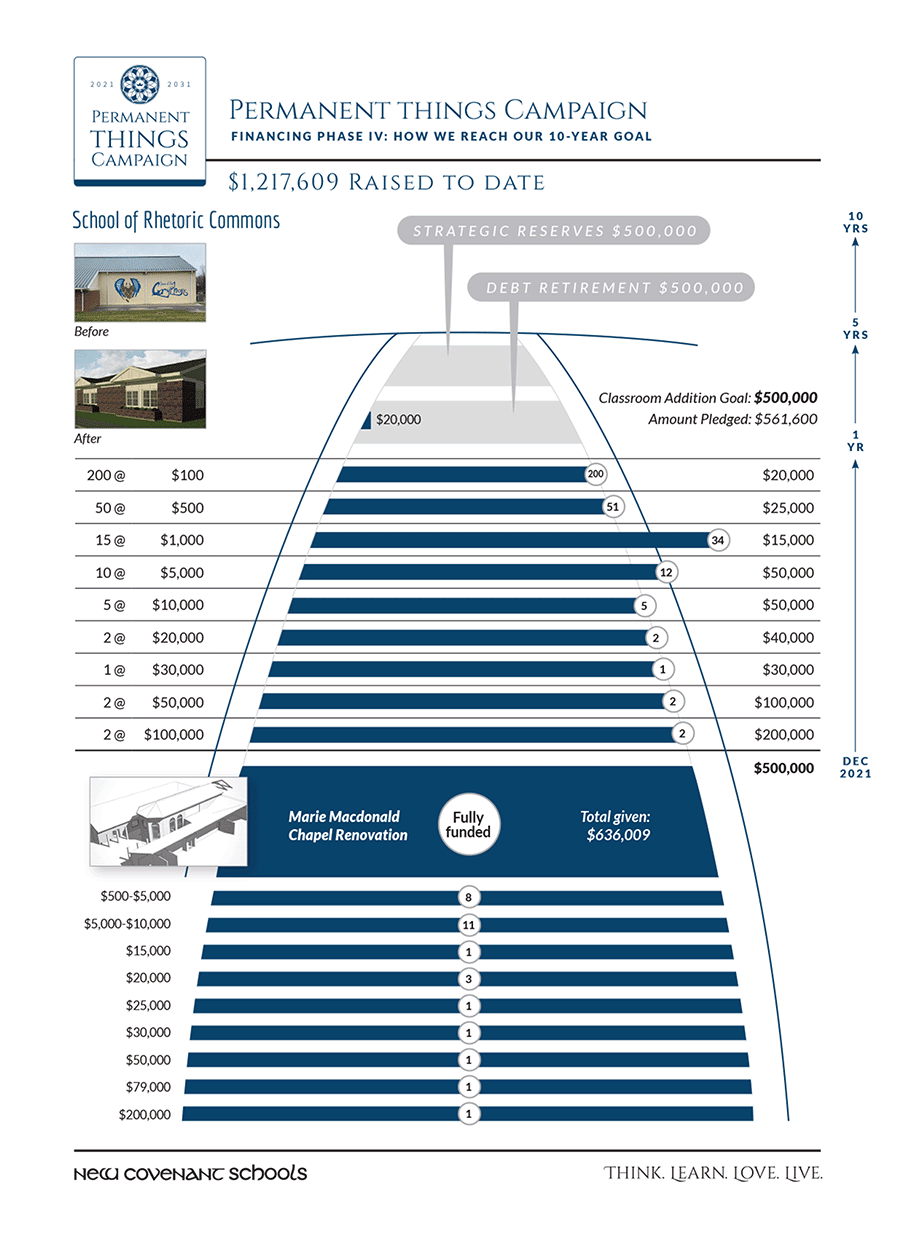