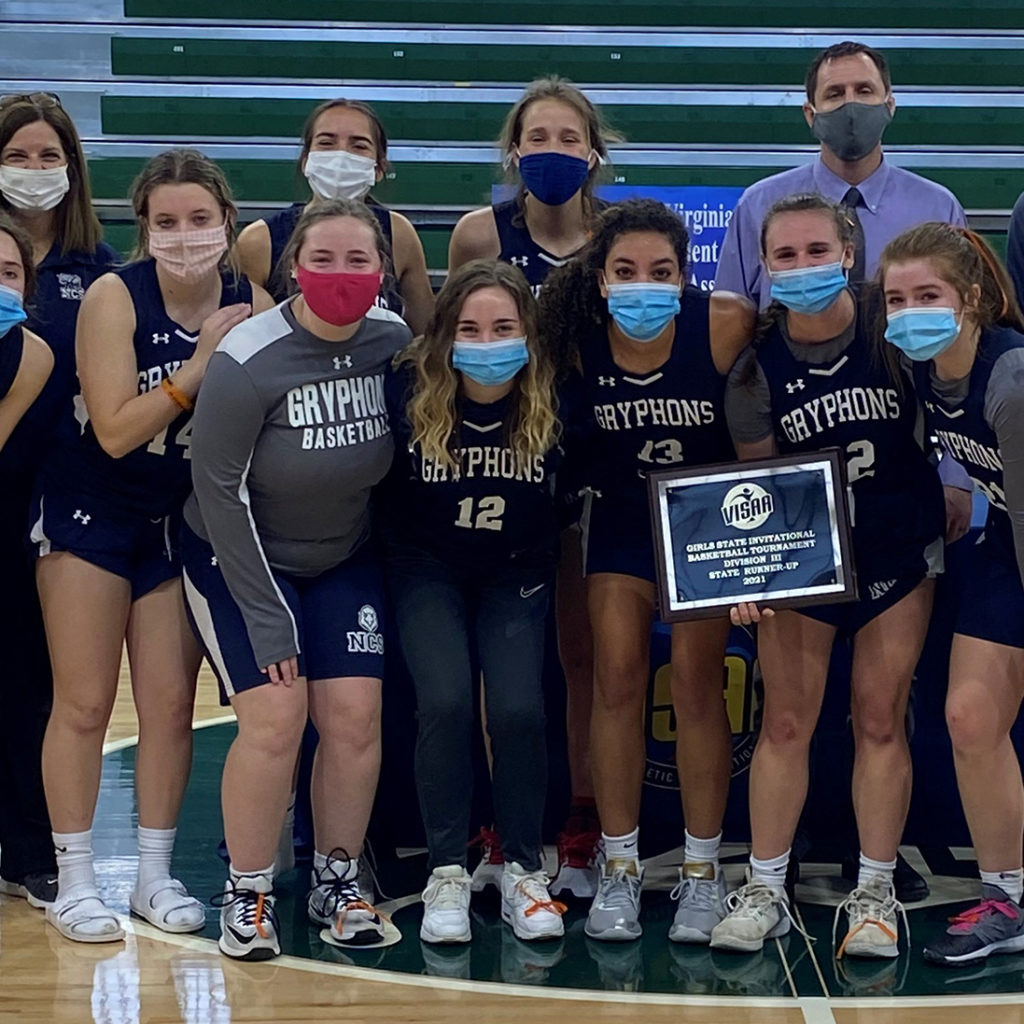 The 2020 women’s varsity basketball team will be honored for years to come as the Lady Gryphons finished their season as a finalist in the Virginia Independent School Athletic Association (VISAA) Division III tournament. It has been a rough year for sports, but Athletic Director John Maynard kept the team together and worked overtime to secure games for a full season. Quarantines kept the team off balance, and a knee injury kept Janna Renalds, a leading scorer, off the floor. Nevertheless, the girls remained competitive and finished the season with a 6-6 record.

Last fall it was not clear if the VISAA would sanction a post-season tournament. As the COVID numbers dropped statewide, however, the opportunity to play was offered, though not without mitigations such as wearing masks during play. The girls went to the quarter-finals defeating Eastern Mennonite from Harrisonburg last Tuesday night at home. They advanced to the semi-finals, but the scheduled game was forfeited by our opponent having been disqualified by VISAA for violations of COVID protocols. That put New Covenant in the state championship game for the first time in school history, and the girls traveled to Richmond on Saturday to play the Virginia Academy, a talented team from Loudoun County.

The girls obviously benefitted from the unfortunate disqualification; however, this should not overshadow the level at which they played all year. Their conference record for the season was 5-1, and the average margin of victory was 21 points. Part of the team strength was due to our five seniors Bibby Kittrell, Emilee Newsome, Phoebe Prillaman, Janna Renalds, and Sophia Rucker. Phoebe scored an average of 13.2 points per game, while Phia grabbed 14.8 rebounds. Add an average of 2 steals per game from Emilee, the team’s point guard, and the girls were a force to be reckoned with.

The state championship game did not go New Covenant’s way, but the girls continued to play as consistently as they had all year. Phoebe scored 14 points with four 3-pointer’s, and was named the game’s Most Valuable Player (MVP); Phia pulled down 20 rebounds, Emilee had 3 steals, and Anna Burton scored 6 points on two 3-point shots. Phoebe and Phia were both named to the All-Championship Team.

We congratulate the team and their coach, Sarah Burton, who remarked, “We are better together; that’s the idea we’ve built into this women’s basketball program all year.”